The Sierra the Gata is a magical place

In view of the recent publicity due to the devastating forest fires which were suffered in the month of August, giving rein to a whole campaign first of immediate help, then plans for re-forestation, the Sierra de Gata has suddenly found itself in the limelight, and is doing its very best to promote the local businesses in an attempt to recuperate some of the losses in revenue suffered.

To this end we would like to thank the Director-General of Tourism, Don Francisco Martín Simón, who has offered invaluable help, both burocratic and financial, thus enabling the  elaboration of a whole programme of autumn activities, the next being on Saturday October 24th. Details of these events can be found on the special website elotoño.com  Please find time to visit us and join in the fun!

For those of you unfamiliar with the area, the Sierra de Gata is a magical place, imbibing the visitor with a sense of mystery, of ancient customs, with a great feeling of inspirational tenderness.

Situated in the northern part of the province of Cáceres, Extremadura, between the Portuguese border and the province of Salamanca, the Sierra de Gata is an extense region, including 6 valleys surrounded by undulating hills, the highest of which reaches up to almost 1500m, and  housing 22 small towns and villages, ranging from 200 to 2.500 inhabitants with the exception of Moraleja with approximately 7.500. The area has some of the best roads of the whole of Spain, and is reachable in approx. 3 hours from any of the main airports of Madrid, Oporto, Lisbon, and low cost from Valladolid.

This is one of the least known areas of the whole of Spain, but has a wealth of possibilities for even the most discerning traveller. It is an ideal solution for small activity groups, especially walkers, bird-watchers, horse-trekkers, artists and so forth, with verdant countryside and magnificent views. There is an abundance of historical buildings and churches to be explored, along with several ruins of mediaeval castles, Arab tombs and Roman causeways; villages with an architectural style reminiscent of past centuries

Accommodation is provided by a large range of country guesthouses, some of which can be rented as a whole, others as rooms, but mostly with a special, cosy rustic style which is very appealing to all. The Sierra is interlaced with crystal clear rivers, providing natural pools for summer entertainment, all completely free of charge, and many with manicured lawns and small bars and cafeterias, in addition to a large municipal pool in each village for the use of which a small charge is levied.

The Sierra de Gata is renowned for its gastronomy. The total absence of heavy industry gives way to local ones, in which the elaboration of Extra Virgin olive oil stands out, having reached international fame and winner of a great many prizes. In addition, the local goats’ cheese, honey and wine are very popular as cottage industries and the whole region has a wealth of craftsmen, including the famous lace-makers, who sell their wares at the regular village fairs.

We hope to see you soon! 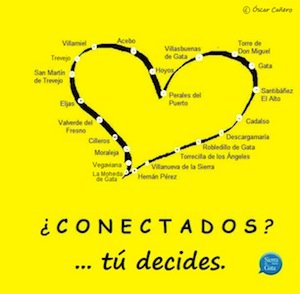